Please note that this is not the current year’s Interesting Test.

This page uses MathJax. If the math doesn’t look right, you can probably blame your out-of-date browser.

Problems which at first seem to lack sufficient information: 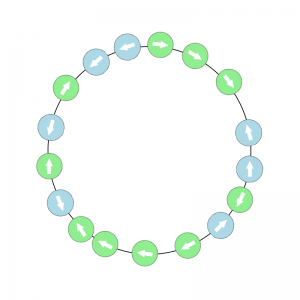 My wife and I were invited to a party recently, a party attended by four other couples. Some of the 10 knew some of the others and some did not, and some were polite and some were not. As a result, a certain amount of handshaking took place in an unpredictable way, subject only to two obvious conditions: No one shook his or her own hand and no husband shook his wife’s hand. When it was all over, I became curious, and I went around the party asking each person: “How many hands did you shake? …And you? …And you?” What answers could I have received?

Conceivably, some people could have said None, and others could have given me any number between 1 and 8 inclusive. That’s right isn’t it? Since self-handshakes and spouse-handshakes were ruled out, eight is the maximum number of hands that any one of the party of 10 could have shaken.

I asked nine people (everybody, including my own wife), and each answer could have been any one of the nine numbers 0 to 8 inclusive. I was interested to note, and I hereby report, that the nine different people gave me nine different answers: someone said “none,” someone said “one,” and so on and, finally, someone said “eight.” Next morning, I told the story to my colleagues, and I challenged them, on the basis of the information just given, to tell me how many hands my wife shook.

Show that the warehouse will be emptied within a finite period of time. You may want to begin with the special case in which all the boxes initially the warehouse are labeled with 1’s and 2’s.

Some numbers can be expressed as the sum of 2 or more consecutive positive integers (sometimes in more than 1 way):

Some numbers can be expressed as the sum of three or more consecutive positive integers (sometimes in more than one way):